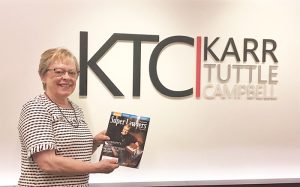 KTC bankruptcy attorney and #1 Ranked Washington Super Lawyer Diana Carey was on the cover of and featured in the just-released 2017 Washington State Super Lawyers magazine.   The article, entitled “Bankruptcy, Bach and Everything in Between,” describes Diana’s nontraditional path in becoming one of the leading bankruptcy attorneys in Seattle.  Diana’s passion for baroque music is reflected in the cover photo which shows her at her harpsichord.  Diana shares her mission and success tips, while colleagues of hers weigh-in on what makes her the superb bankruptcy attorney she is today.

Her unconventional career path began with an itinerant childhood, as her father’s job with Boeing led them to several different states before landing in Seattle. Realizing that teaching elementary school was not a good fit, on the advice of a career counselor she obtained a Masters in Library Science. After working four years as a science reference librarian at Seattle Public Library, she moved to Boeing where she headed the Boeing Libraries. From there she was promoted to Manager of Graphics for Boeing.  Wanting a change, she again consulted a career counselor.  “You like research,” the counselor noted.  “You could go to law school.”

Below are a few excerpts from the article:

Lawyer friends warned that her age and gender would work against her. But she applied to the UW School of Law anyway. Three years later, at age 42, she went to work at historic downtown Seattle firm Karr Tuttle Campbell, where she was introduced to business and bankruptcy law. “Not all firms were enamored of hiring a woman in her 40s,” Carey recalls. “But KTC was one of the very first to have a woman partner—Muriel Maurer—and I liked that about them.”
.…..
What makes her so effective at what she does? Carey’s colleagues offer a couple of suggestions. First, she became a lawyer much later than most, so she has viewed life through different lenses. And, second, she’s a woman. “Bankruptcy law used to have a reputation of being an old boys’ club,” [recently retired federal bankruptcy judge, Karen Overstreet] says, “As a general rule, I think women tend to be more collaborative problem solvers.”

Overstreet also noted that bankruptcy law “is about working out a deal, a compromise that benefits as many parties as possible… Diana Carey is a dealmaker.”  One of her clients states “Diana is even-keeled, which is a crucial quality…She’s a good attorney, but she also has a good business sense.”

One of Diana’s personal heroes is U.S. Senator Elizabeth Warren, who is a former bankruptcy professor and whose mission for financial transparency Diana shares.  She is also active in the community, serving on several boards, such as KING-FM, UW Friends of the Libraries and several music organizations. Seattle Chamber Music Society Executive Director Connie Cooper notes that “Diana can accomplish more in 24 hours than anyone I know… she appreciates all the little pieces involved in any project, and knows how to make things happen.”

Carey’s final words?  “It’s important to be involved,” she says. “With your practice, with the Bar, with nonprofits—whatever you do. Get outside yourself.”

Read the full article, “Bankruptcy, Bach and Everything in Between,” on the Super Lawyers website. The article was originally published by Super Lawyers, July 2017, for the 2017 edition of the Washington State Super Lawyers magazine.