Walter M. Maas III is a shareholder at Karr Tuttle Campbell and the head of the Business and Finance Department. His principal areas of practice are corporate law and finance, mergers and acquisitions, joint ventures and strategic alliances, and the formation and capitalization of venture capital, buy out, real estate and other investment funds. Best Lawyers named him the “Lawyer of the Year” for Business Organizations in the Seattle Area for 2016, in addition to naming him a “Best Lawyer in America” on multiple occasions.

Walter M. Maas III’s principal areas of practice are corporate law and finance, mergers and acquisitions, joint ventures and strategic alliances, and the formation and capitalization of venture capital, buy out, real estate and other investment funds. He is a shareholder in the firm and chairman of the Business and Finance Department.

Walt is active in the American, Washington State, Wisconsin State, and King County Bar Associations and was a long standing member of the Board of Editors for the Attorney/CPA Tax Clinic. He has been recognized by a multitude of organizations. Best Lawyers named him the “Lawyer of the Year” for Business Organizations in the Seattle Area for 2016, in addition to naming him a “Best Lawyer in America” on multiple occasions. He has also been named a “Super Lawyer” by Super Lawyers and Seattle Met, one of Seattle’s best lawyers by Seattle Magazine, one of Washington State’s best lawyers by Washington CEO magazine and was designated as a Top Lawyer in Puget Sound by Seattle Business Monthly.

He has been an adjunct professor at the University of Washington School of Law Graduate Tax Program and a senior adjunct professor at Golden Gate University’s Graduate School of Taxation. He frequently lectures on aspects of structuring and financing technology ventures and other business enterprises, mergers and acquisitions, private equity and corporate and individual tax planning. He has written numerous papers and co-authored various publications, including “Washington Partnership Law and Practice Handbook” and “Buying and Selling the Closely Held Business in Washington”. 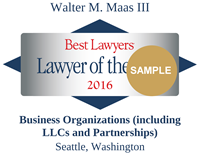 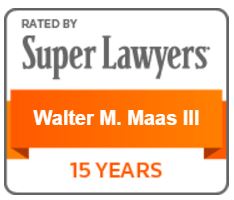 We welcome your interest in Karr Tuttle Campbell. However, we cannot represent you nor can we treat information as confidential until we know that doing so will not create a conflict of interest. Accordingly, please DO NOT send information about any matter unless you are an existing client AND one of our attorneys has explicitly affirmed that we represent you as a client in the matter to which your communication would pertain. Providing information via the “Contact Us” form on this website or otherwise will not create an attorney-client relationship in the absence of an express agreement by the Firm to create such a relationship, and will not prevent the Firm from representing someone else in connection with the matter in question or a related matter.